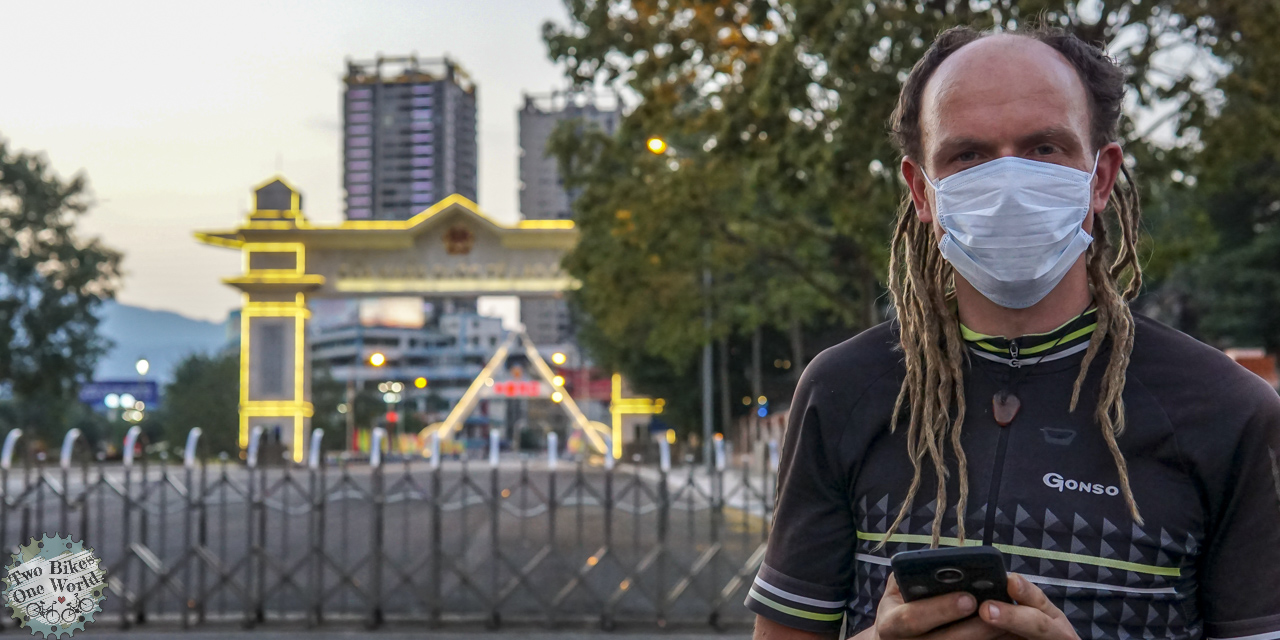 This is part 1 of the trilogy about our escape from the coronavirus and its effects in Southeast Asia. In the 1st part leads our journey from China to Vietnam, from where we come to Laos in the 2nd part and finally make it just to Thailand in the 3rd part.

First part of the trilogy: Corona always a chain length ahead

… “What doesn’t happen at home.”
… “Ah yes, weather is nice.”
… “No rain, well.”
… “Yes, it is already in the middle of the night here and only in the afternoon at yours.”
… “Joop, are now back in China and cycling diligently.”
… “Oh, something was reported in the Tagesschau about a new virus.”
… “What’s the name?”
… “Corona? – Isn’t that the sun wreath?”
… “No, not with us. China is huge, Mum. Almost as big as the whole Europe.”
… “Where?”
… “In Wuhan? We are not there. It’s probably several thousand kilometers away. We rode from Shanghai via Guilin to Shangri-La and are now on our way to Kunming.”

So we first learned about the coronavirus in early/mid January and thought nothing special about it, like most people in the world. Many viral diseases are often transmitted from animals to humans through the consumption of meat and animal husbandry.
– It will not really affect us. –

Less than a week later, our parents inform us again that China is beginning to close off the city of Wuhan in Hubei Province.

“Yes, no stress. China is very strict in implementing measures and complying with rules, as we have experienced first-hand. Everything is normal with us, nothing is locked here.”

We cycle happily in mid-January and don’t think anything of it.

On the last day of cycling to the Chinese/Vietnamese border, we have long since rediscovered a road control in China. These controls are quite common in border regions of the country, so we are confident of them.

– But this control seems to be a little different. The Police officers hold a device in the driver’s face. Probably an alcohol test, since yesterday was Lunar New Year (Chinese New Year) and the population could be an alcohol-happy folks, like most Germans. But no, now they also control the alcohol content of the remaining occupants in the car, even children? … This can’t be… Ah, it’s modern infrared fever thermometers that are held to the forehead! And now it’s our turn. –

So we let our first temperature measurement pass about us cheerfully and slightly amused due to Corona. A day later a second measurement followed and already we leave China on 26.01.2020 at the border crossing with its Bridge of Friendship (Friendship Bridge) over the Red River in Hekou/Lao Cai. We are still a little surprised why the border crossing is so extremely empty, but by now we are already claiming it to the Corona status and are looking forward to having little stress.

We liked China with its pleasant people, its diversity and its extremely beautiful nature for cycling and so we look back on our time with a tearful and a laughing eye. Now we have left the land of the coronavirus behind us and the wheels should now continue to roll without any further complications. 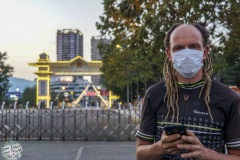 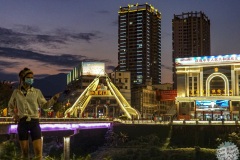 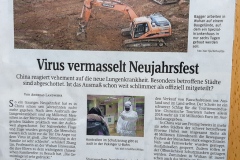 Arrived on the Vietnamese side we are given our first face masks, which we should wear immediately. Absolutely disinfect the hands several times and then sign a form that we have not been to Wuhan in the last few weeks and have no symptoms of illness.
– Nothing easier than that. –

Wearing mouthguards is a normal part of everyday life in far-off Asia and Southeast Asia. Depending on the situation and accumulation, people try to avoid disease transmissions quite successfully. In road traffic, it is almost more common to wear a mouthguard than a helmet. In terms of these habits and popular acceptance of wearing mouth masks, these countries are much ahead of most countries in the world. 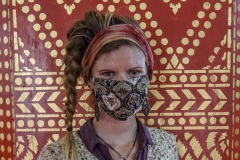 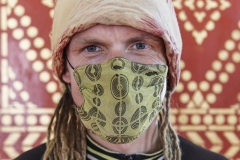 Funnily enough, few officials on the Chinese side wore mouthguards at the time, while on the other side of the bridge in Vietnam, officials are careful to wear mouth masks and hand disinfection. After leaving the border building everything is normal again, it is only worn sporadically and not worn by everyone, similar to China.

Less than a week later, we learn that our border crossing was probably closed only 4 days after we passed through Corona.
– Yeah, lucky again. –

The situation in China seems to be rapidly worsening. But in the north of Vietnam, we are not aware of much of the effects of the Corona crisis. Sometimes a motorist stops and gives us breathing masks so that we can wear them for protection while cycling, but this seems impossible for us at Bergen.

It is rainy season and the sun can only be seen once a week. The accommodation prices of the country are quite cheap, which is why we treat ourselves to a dry room to sleep in from time to time. One day, when checking in in the middle of the night, an inn owner tells us in a few shreds of English that he would like to leave with our passports and come back right away. We are unsure whether it is a communication problem, but we would like to remind him that the passports belong to us and stay here. The owner gives in immediately and we go to bed exhausted but happy.

Arriving on the north-east coast of Vietnam, we now notice the absence of Chinese tourists and many inns are empty. In one of our nearest hotels, the owner scrolls through our passports and discovers our China visa. Immediately, she takes out disposable gloves, puts on a breathing mask, and holds our passports with a disgusted, frightened look and outstretched arms far from herself, as if the passport were wearing the coronavirus in person. She scrolls back and forth in her passports for several minutes, as if the China visa were going away if she would turn around often enough. Less than an hour later we get a visit from the local police. Four officers sit in circles around us. It is measured by the medical staff fever and we have to recite our whole career since December so that it can be accurately logged with pen and paper. The police remain very polite all the time and often stress that we have nothing to fear. It serves only as a security precaution, because we come from the oh so dangerous China. – Although it is now 2 weeks ago. – After an hour they are satisfied, say goodbye to us and we finally have our peace. This process will be repeated a second time in the next few days in another small provincial village.

The mood changes and with it our tactics

So that we do not have to answer the same questions of the unsettled village policemen for an hour in the evening, we plan to hand over our second passport at check-in in the future.

But unfortunately at the next accommodation, the “Friendly Homestay 1”, where we show up after a long cycling day without reservation, we do not even manage to show the pass. The entire complex with pool and bungalows is empty. Without Chinese tourists and with the prevailing rainy season, we are in the absolute low season. On arrival we are greeted very politely and asked if we have a reservation. We deny this. Then the young woman looks at us with pity and thinks that her resort is fully booked. We open the page on our smartphone where we found lots of empty rooms in their resort online. Then, she goes to her computer, locks the free rooms in all sorts of online platforms for the next 2 days and claims that it is unfortunately already fully booked. Vietnamese guests would then arrive later. We should update again and look closely. We are a bit perplexed by this approach and are pulling away in an upset way. Out of spite we camped right in front of the entrance of the property. Not a single car gets lost that night in the empty resort.

Again and again, local passers-by show us on the side of the road holding their hand as soon as they discover that they are afraid of a corona transmission by us. Most of the time, however, they already wear a mouthguard mask anyway.

We don’t want to throw the gun in the grain yet and give ourselves one last chance within the next rainy days. This time we choose any trucker accommodation directly on the road. The wife of the house shows us a fairly simple room, but we agree after a short reflection. Just when we want to carry the things from the bike to the room, her husband comes home and says he is sorry, but the accommodation with the many empty rooms is fully booked. This time we are not so surprised and simply move on without much discussion. Without even checking our origins, Vietnamese propaganda and reporting seem to have left a large part of the population in a position to respect any foreigner. At that time, almost no infections with Corona outside China have been noted. 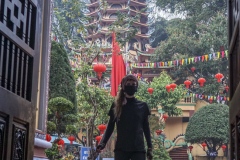 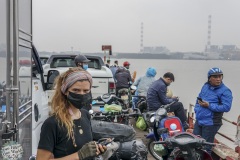 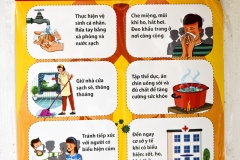 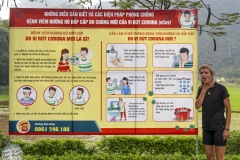 From then on, with one exception, we no longer tried to find affordable accommodation in Vietnam. However, our caution in this regard also came from the fact that other cyclists had only emphatically escaped a police quarantine. Luckily, as the weather moved south, the weather became sunnier and we were no longer dependent on it.

After 26 days we leave Vietnam in the heaviest downpour of our cycling world trip (and life) over the border pass in Nam Phao. We had not felt so much welcome in Vietnam, but this is understandable according to the circumstances.

Part 2
Laos, the country without Corona